The Tobacco Control Industry is killing us. 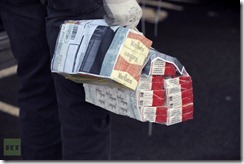 They never ever think of the consequences until after the fact. And they’ve been warned what would happen.

Private eyes working for the tobacco industry have spent weeks rummaging through litter bins and scouring pavements for cigarette butts to access the scale of the black market in England’s midlands region, according to the Birmingham newspaper the Sunday Mercury.

Operation EDPC – which stands for Empty Discarded Pack Collection – was funded by Swiss-based brand protection company MS Intelligence – found that 31% of cigarettes were either bogus or bought abroad.

But then the UK border agency are getting on top of the problem. NOT.

Investigators were shocked by the sheer volume of the trade, which has more than doubled in the last 12 months. A similar study last year found only 14% of packets were fakes or had been smuggled into the country.

The trade in counterfeit cigs is big business. HM Revenue and Customs (HMRC) estimate that non UK duty-paid cigarettes cost the tax payer up to £3.6 billion during the financial year 2009-2010.

That 3.6 billion is more than enough to cover the cost of so called smoking related diseases. (2.7 billion quoted today by the Chief medical Officer).

Posted by The Filthy Engineer at 21:17 7 comments: