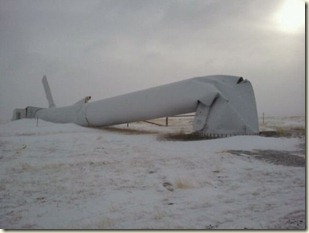 I had to laugh when I had my weekly E-mail from “Wind Energy Update”. (They think that I’m a wind contractor or some such).

Anyhoo. It seems that all is not well for monopile wind turbines situated off our shore. It’s all to do with stuff like the material you put between your bathroom tiles.

Gaze at an offshore wind farm and it is hard not to be moved by the might and power of it all. Unfortunately for the industry, however, at least one element of many offshore installations does not have all the might and power it should… and its effect is moving in a more worrying way.

“Retrofitting these could cost developers as much as EUR€120,000 per turbine, equalling up to €9.6 million at larger projects such as Horns Rev, although future projects using monopiles are not assumed to be affected.”

But then I read this.

“These supports are not designed to transfer bending moment from wind loading. Due to the dynamic loading from the wind, fatigue cracks can initiate and propagate into the main steel structure. How severe it is depends on loading and utilisation with respect to capacity.”

Why design something that is unsuitable for the force of the very element that you’re trying to harness? Really. Shear force and bending moments are Applied Mechanics 101.

Posted by The Filthy Engineer at 19:27 8 comments:

The other day I was just looking at my Blog stats and found heavy traffic coming from an air line forum. The particular article of mine was this one. But that’s by the by. Scrolling down the thread on that forum I came upon this gem.

"The scientific theory I like best is that the rings of Saturn are composed entirely of lost airline luggage."

Posted by The Filthy Engineer at 12:46 2 comments: