This looting made me laugh.

They had seen the images from London and Birmingham and wanted to bring a bit of rioting and looting to their own little corner of a West’s market town.

With their hoods up and with bricks in hand, they had arranged to meet on Facebook and selected their target – the Tesco Express store in the centre of Calne, Wiltshire.

But things didn’t really go according to plan for the Calne Five, who hadn’t exactly done their homework before setting off for a night of rioting, mayhem and looting.

For a start, they perhaps failed to realise that the looters of London were smashing shop windows because shops were closed so they could get inside to steal their goods.

It gets funnier by the minute

But if the shop is still open, like the Tesco Express in Calne was at the time on Tuesday night, they could easily have simply walked in through the open door.

But, with the two frightened staff inside quickly calling the police, the five set about trying to smash the huge pane of thickened glass that makes up much of the shopfront with their bricks and sticks.

It cracked, but did not shatter. In the end, with the door to the shop opening and closing just feet away as bemused customers came and went, the five ran off as the police arrived.

The full story is here.

I think I’ve wet myself.

Posted by The Filthy Engineer at 22:12 8 comments:

Email ThisBlogThis!Share to TwitterShare to FacebookShare to Pinterest
Labels: looter

Yesterday I posted about an 89 year old man, called Aaron who had his barber shop destroyed by the looters.

It would seem that he’s not the only one who’s livelihood has been destroyed.

So if you feel you can donate a smidgeon more please pop over HERE. 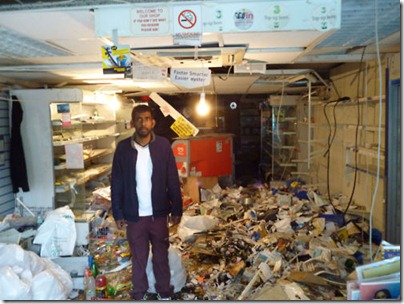 Not a pretty sight is it?