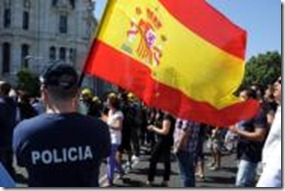 Mrs FE and myself touched down safely in Madrid early on Monday morning. having looked at all the options of getting to our hotel (Westin Palace), we decided to catch a ride on the Metro. On emerging from the final stop with blinking eyes from the bright sunlight we were met with a strange but worrying sight. There were Police and Police vans everywhere you looked. (In the UK you are lucky to see one let alone hundreds). After a few seconds we realised why. There were thousands of Spaniards coming down the road behind us. At first I thought that somehow my Spanish readers had got word of my trip and were coming to meet me. However one look at the signs they were carrying made me think that a lynching of this blogger might be their real aim. The placards all had one word on them. NO.

Anyhow Mrs FE and myself, decided we’d best scuttle off (Best describes the action of a person with a small wheelie case) in the direction of our hotel. Worryingly it soon became apparent that where we went, the mob seemed to follow. As we approached the road in which our hotel was situated we noticed that the police presence was increasing by leaps and bounds and we redoubled our efforts to obtain sanctuary in our monastery Hotel.

This was not to be. With a baying mob on our heels we arrived at the hotel’s road to be confronted with metal barriers and three lines of police in riot gear blocking the thoroughfare. Ooh err. Unfortunately my Spanish is only good for Hallo (Hola), Two beers please (Dos cervesa pour favor), and thankyou (Gracias), so needless to say the police didn’t want to lets us through. (Did they think we were some activist fifth column? You tell me?).

Of course Mrs FE, being fairly organised, managed to produce from her Portmanteau handbag, a map of the area, and we found a back route which would take us to the entrance of the hotel. Luck was now on our side as the back was only lightly defended by the police and we managed to blag our way through the barricades and finally checked into the hotel.

After we checked in we nipped outside to see what was going on. The demonstrators were doing their best to pull down the barriers but were dissuaded from doing so by the occasional baton strike from the odd annoyed member of the Policia.

Anyway we got bored with this and decided to head of into various areas to see what the city was like.

One thing we never found out that day was why had that street been targeted?

You tell me, and I’ll tell you the cost of cigarettes and how much, two gin and tonics and two large whiskeys cost me in the hotel bar.

Posted by The Filthy Engineer at 21:27 6 comments:

Posted by The Filthy Engineer at 16:42 5 comments: