From a publication that knows it how it was.

I was pointed to a well known publication and read an article that summed up the condition of the EU.

Take “human dignity,” for instance. As a result of the benefits Neoliberal Capitalism has been showering on Europe since the fall of the Berlin Wall, by day the streets of most European cities have become a living room for increasing numbers of homeless. At night these streets are transformed into open-air bedrooms, with the homeless making themselves comfortable on mattresses made out of flattened cardboard boxes. The streets seamlessly convert into dining rooms whenever the homeless are hungry. Then they go about scavenging for leftovers among the rubbish in dustbins and garbage containers.

And finally it finishes with:

All talk about human dignity, physical and mental integrity, and liberty and security of person is empty. It is empty because the security of the state (the EU and its member states) is deemed to have priority. You can find proof in the Lisbon Treaty, Title II, article 67:2 “ The Union shall endeavour to ensure a high level of security through measures to prevent and combat crime, racism and xenophobia, and through measures for coordination and cooperation between police and judicial authorities and other competent authorities, as well as through the mutual recognition of judgments in criminal matters and, if necessary, through the approximation of criminal laws.” The clause seems bland, but it means state security (however defined) takes precedence over the rights of individuals.

Have a guess at which national Newspaper this is from.

If you haven't worked it out then look here.

Uncle bill
Posted by The Filthy Engineer at 20:09 No comments: 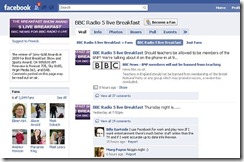 It really is time to end the BBC license fee, if this is the way they throw it away.

The BBC has lavished thousands of pounds teaching staff how to learn to use social networking site Facebook, despite its simplicity.

The corporation has been holding day long classes called Making The Web Work For You, for large numbers of its 23,000 workforce.

I'm sure that if a private company wasted it's money like this, the shareholders would be baying for the directors blood. If those at the Beeb are to thick to find out how to use something that a child manages easily. Then they should be fired.

One worker said: 'We're meant to be belt-tightening. It is an astonishing waste of money. Teenagers who can barely read or write have managed to teach themselves.'

Others have pointed out that most BBC staff already know how to use these sites.

Mind you it does reflect in some of the dross they produce.

Read it here if you must. I'm losing the will to live (Again). 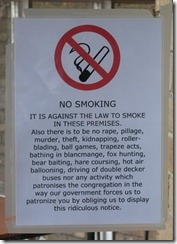 It's really all about the money isn't it. This little snippet from the ASH site.

We also believe that the Government should, in addition, increase tobacco prices this year by 5% above the projected rate of inflation through taxation. The attached report for ASH models the impact both in terms of the impact on public finances and economic benefit from such a tax increase and finds that government revenues will increase by over £500 million a year, amounting to £2.6 billion over five years. These benefits arise from the following revenue streams set out in the table below:

Increased revenue from tobacco taxation;

Reductions in healthcare costs;

Increased tax receipts from additional years of working life;

Increased tax receipts from reduced absenteeism;

Reduced spending on benefits relating on benefits related to sickness and disability; taking into account

Increased spending on state benefits for retired people.

Here is the link. Don't go there if you have high blood pressure.

Posted by The Filthy Engineer at 11:54 No comments: