Good does not mean expensive.

In relation to my last post about the expensive MRA4 debacle, I cannot understand why we always seem to go for expensive weapons systems suited for the cold war, that has been over for some time.

Now I was at sea for a considerable number of years and saw a tendency for the ordering  of very expensive high tech warships but few in number. The problem as I see it, is that those ships cannot patrol all our vested interests. To give you an example we had one Frigate/Destroyer and a support Tanker in the Caribbean undergoing counter drug operations, disaster relief, and protection for our Dependencies. We had another small warship in the Falklands along with a support tanker.

Now we have one minor war vessel in the Falklands, most of the time no warship in the Caribbean, and one support tanker trying to cover both areas.

In the past after the Falklands conflict we normally had a Type 21 Frigate and a cheap and cheerful Rover class tanker in each area of operation.

This gets me to  the point I would like to make. Why don’t we either build/buy some cheap and cheerful frigates armed with a gun on the front, a point defence missile system, and a reasonable anti submarine detection system.

Another idea would be to build more “Wave Class” Auxiliary Oilers (AO) which have proved themselves in the Caribbean by the very fact that with their fuel capacity, their facility to carry a Law Enforcement Detachment  Team from the US coastguard, Helicopter, weapons, etc, they have become a range extender for the coalition in the fight against drugs. (Incidentally I was on an AO out in the Caribbean, where we intercepted 32 Tonnes of Cocaine being shipped to Europe). Present armament Two 30mm powered mounts, two Mk 48 miniguns, and five GPMGs. Plus active decoy systems, ECM, and ESM. Plus the provision to fit CIWS phalanx. 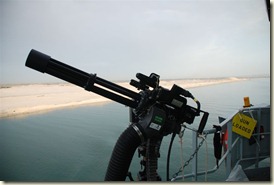 Pic is of a minigun.

Armament could be enhanced by buying something like THIS. That would be quite sufficient.

Lets think numbers, rather mine’s bigger than yours.

And don’t get me started on Eurofighter Typhoon.

You’ve just upgraded your fleet of cars with new sound systems, fitted new fuel economic engines and have paid the cost already. Surely you wouldn’t cut them into pieces because you couldn’t afford to run them, would you? 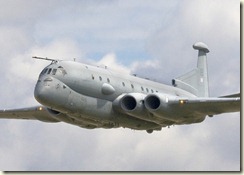 Substitute the word “car” for Nimrod MRA4, and you see why you shouldn’t let Governments run anything.

Posted by The Filthy Engineer at 11:40 3 comments: