My three least favourite organisations in the UK (Apart from Parliament of course), seem to be heading for a bit of a bun fight.

In an almighty battle to salvage credibility,  three British government institutions are embroiled in a new global warming scandal with the BBC mounting a legal challenge to force ministers to admit the truth. Sceptics ask: Is the UK government’s climate propaganda machine finally falling apart?

I haven’t seen this in the UK MSM and certainly not on BEEB news.

And hopefully this will come to pass.

With the BBC appearing to take the side of the Met Office by seeking to force the government to give honest answers, untold harm will likely befall Prime Minister Cameron’s global warming policies on energy, taxation and the environment.

We shall see. You really should read the rest. It could spark an explosion in the next few weeks.

No wonder my Council tax is so high. 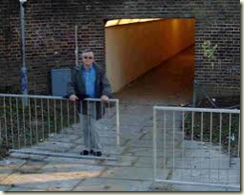 A PLAN to remove safety railings which shield walkers from traffic in Tonbridge town centre has already cost the taxpayer £39,000 – and that's before a decision has even been made.

The Courier can reveal Kent County Council has handed a staggering £39,037 to Jacobs Engineering to look into tearing down the pedestrian guard railings in 12 towns across the county.

Now I could have done that at a cost of a few litres of diesel, a pad of paper, and a pencil.

Kent County Council's Pauline Banks said the cost of the report "did not include the cost for actual removal".

Well, Kent County Council, I have a proposition to make to you. If you want them taken down then buy me a hacksaw, plenty of blades, and a file and I’ll do it for you for £10 an hour. If you don’t mind it taking a while.

Let me see. There’s 350 of the blighters so if I were to remove two per hour for eight hours per day, it would take me 21.8 days. Now as a true working man I would expect to have numerous Tea breaks and chats to passers by, so I’ll say a month would be reasonable. I’ll even save on expenses as Mrs F.E. can drop me in the High street in the morning, on her way to work, and pick me up on her way home.

How about it KCC?