This was reported in the Dutch newspaper, Vrij Nederland. The paper picks up on some distorting of facts in Chapter 12 of the WG11 report.

The Netherlands is an example of a country highly susceptible to both sea-level rise and river flooding because 55% of its territory is below sea level where 60% of its population lives and 65% of its Gross National Product (GNP) is produced.

In fact, as the newspaper tells us, these figures are far too high.

The Central Bureau of Statistics (CBS) states that only one fifth of the Netherlands is below sea level and that only 19 percent rather than 65 percent of the GDP generated is generated in that area.

It would seem that the IPCC is deliberately exaggerating in their literature in order to have a maximum propaganda effect.

As EU Referendum considers. "Is this deliberate fraud?"

Posted by The Filthy Engineer at 20:29 2 comments:

Talk about back stabbing.

When I saw this picture I was amazed. 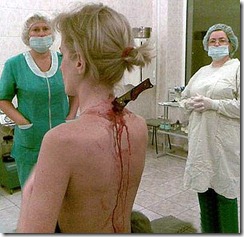 Apparently this young woman was stabbed by a mugger. What is so astonishing is that she didn't realise that she had a six inch knife still stuck in her back.

I must admit I'm as credulous of the truth of the original article in a Russian tabloid, as The Daily Mail is. How could you not feel it? (Ouch)

Email ThisBlogThis!Share to TwitterShare to FacebookShare to Pinterest
Labels: Back stabbing, Ouch

Climategate. The BBC puts the boot in.

Oh and Melanie Phillips wades in as well

Posted by The Filthy Engineer at 09:19 No comments: