I don’t trust the IPCC.

The latest IPCC (Intergovernmental (Sic) Panel on Climate Change) has changed it’s balance of probabilities of AGW (Anthropogenic Global Warming) from 90% to 95%.

As an engineer, if any diesel engineer manufacturer tried to sell me a diesel engine that only had a 95% chance of not blowing up in 25 years, I’d put the phone down on him in an instant. I’m not in the business of being killed.

In fact we were sold such a diesel engine in the past due to a previous labour government that bought British at any cost when the country was failing. (No change there it would seem).

The engine in question was the Paxman RPH. These had the dubious quality of deciding, without warning, to disengage the connecting rod and piston from the crankshaft and hurl it out of the crankcase at any unlikely passer bye. It’s even more dangerous when you have an engine room with ten of the blighters in situe. Having had one blow up about two seconds after I’d passed it,I learnt to pass them at speed.

Like the IPCC I’m sure this engine was designed by a committee that was only interested in selling their product to the gullible.

As a callow youth I was promoted to the lofty heights of looking after these instruments of the devil engines, and with youthful enthusiasm looked forward to the challenge. Till I actually had to work on one.

Not so the Paxman. From the manual: “Place the engine in the turning frame…………” WTF. It boiled down to the fact that they were trying for a market of ships with low head room in their engine room. If they’d visited ships before they had designed this parody of an engine,they would have seen that their are constraints in space in the other two dimensions as well.

This nicely  brings me back to the IPCC. They have become fixated on the cause of man made CO2 being the cause of Global warming. As an engineer I consider them a danger to humanity especially as they seem to disregard any other causes, and castigate those who question their theories.

Take one of their latest theories of why the temperature hasn’t risen for the last fifteen years. “It’s all been absorbed by the deep ocean”. Don’t make me larf. Warmer water rises not sinks. Apart from that the Argo buoys that measure ocean temperatures can only measure to a few thousand metres, how do they come by this supposition?

Posted by The Filthy Engineer at 20:56 5 comments:

Beer as an investment. 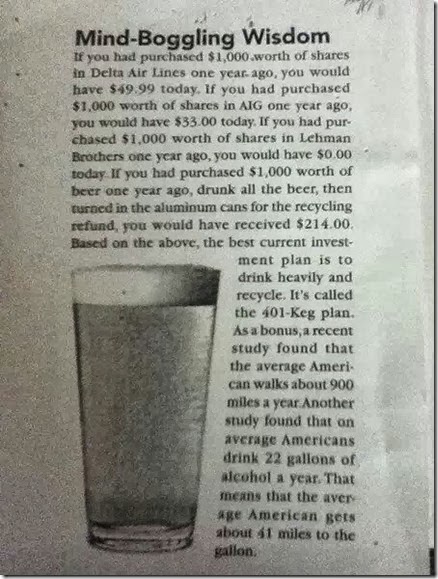 Posted by The Filthy Engineer at 19:36 3 comments: