The government today announced that it is changing its symbol for Parliament from an Portcullis to a CONDOM, because it more accurately reflects the government's political stance....

A condom allows for inflation, halts production, destroys the next generation, protects a bunch of dicks, and gives you a sense of security while you're actually being screwed!

Posted by The Filthy Engineer at 20:16 2 comments:

Email ThisBlogThis!Share to TwitterShare to FacebookShare to Pinterest
Labels: condom.

Wind Turbines. Blade and other Failures

From an E mail sent to me.

According to Caithness Windfarm Information Forum, as more wind farms are built, more failures occur. The forum notes that of the average 104 turbine incidents each year, by far the biggest number are related to blade failure resulting in either whole blades or pieces of blade being thrown from the turbine. A total of 208 separate blade failure incidents have been reported up to June 2011.

Fraser McLachlan, CEO at G Cube comments: “There have been a number of significant [blade] failures this year. They are costing the insurance industry millions of euros.”

Indeed, the rotor represents between 15-20% of the total cost of a turbine. And large blades which can be up to 70m long cost anything between US$30,000 and US$100,000 each. In addition replacing a single blade is not an isolated cost- work needs to be done to ensure that the two remaining blades are properly balanced.

An average of 104 per year. so they’re not only inefficient, but downright dangerous. An example:

"Six-foot blade flies off new Lister turbine". A six-foot blade flew off after only a week's
operation, and landed on a car, damaging its roof. The turbine is on the roof of a brand new
Hospital car park.

And that’s only a small one. Just imagine what a 70m one would do. 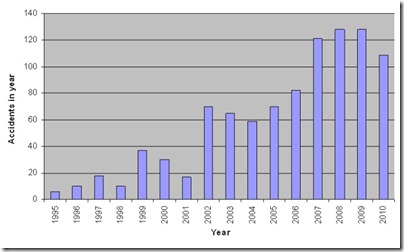 Worth a look here if you would like to see a table of accidents to turbines and the resulting outcomes.

The internet censorship has started

Four leading internet service providers are to offer parents the option of blocking adult content when they subscribe.

The move is expected to be announced today by Prime Minister David Cameron as part of a campaign to tackle the sexualisation of childhood.

All in the name of “We must think of the cheeeeldren”.

Well, you dome headed politician scum, why can’t you leave the control of the internet to the people who should decide? They’re called P-A-R-E-N-T-S.

Anyhoo. How can you decide what is an explicit site or not? Are you going to firewall the national Gallery website, because it contains pictures of naked women?

Of course there has to be a Quango involved . What’s happened to that bonfire Dave? Lost the matches?

A new website, called Parentport, is being launched where parents can complain about television programmes, advertisements, products or services which they believe are unsuitable for children.

Ed Richards, chief executive of watchdog Ofcom, told the paper: "Seven UK media regulators have come together to develop a single website with a single aim - to help protect children from inappropriate material."

Sorry. I should have written SUPER quango.

How soon, dear reader, before you find you can’t access this blog due to the occasional sweary words used here.

The cold, dead hand, of the state in action.

First they came for the smokers