Hundreds of protesters gathered opposite the Houses of Parliament yesterday in support of government spending cuts. 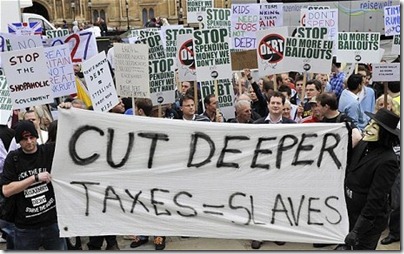 The protest was organised in response to anti-cuts demonstrations in March, which saw hundreds of thousands of people take to the street across the country.

Around 350 people attended the event in Westminster, according to the Metropolitan Police.

It was organised by Rally Against Debt, a new protest group, and attended by an alliance of right-wing activists including the TaxPayers' Alliance (TPA) and the UK Independence Party (Ukip).

Well done to all those that were able to attend. You made the papers. Hopefully this is just the beginning and more people will see the sense in this movement. Maybe this could be the start of TeapartyUKTM

Email ThisBlogThis!Share to TwitterShare to FacebookShare to Pinterest
Labels: ra, Rally against Debt

I’ve had enough. Have you?

Posted by The Filthy Engineer at 18:45 3 comments: