Thou doth protest too much. 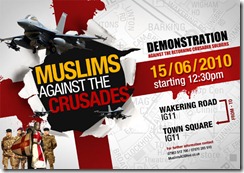 There seems to be a new group of islamofascists in town.

They really are playing with fire in the current situation where we are getting reports of more deaths of servicemen by the day.

I respect their right to free speech but fear that those of a patriotic persuasion may snap in the near future. There may be blood on the streets soon.

A group of predominantly Muslim protesters gathered in Barking town centre, in east London, as members of the 1st Battalion Royal Anglian Regiment marched through the streets.

One witness said: "There were about 25 to 50 Muslim protesters carrying placards with things like 'Muslims Against Crusades' and 'British Soldiers Go To Hell'.

"Then there was a counter-protest of about 100 guys barracking them."

I gather that these were members of "The English Defence League", who proceeded to pelt the MAC with beer and sausages.

The URL for Muslims against crusade if you are interested.

However it's either overloaded or else they've got crap computing power as it is almost impossible to get on there. Mind you, the message I left there with mahommed and Kiddy fidler in the same sentence might have sent their server into meltdown.

Posted by The Filthy Engineer at 20:27 4 comments: 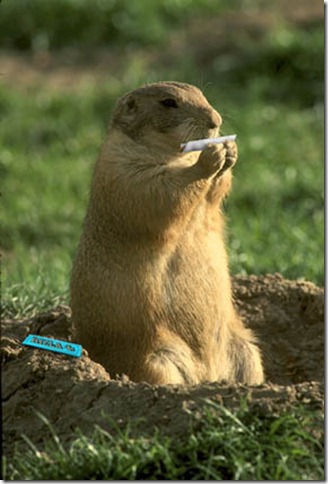 An interesting article I've been reading this morning about the fervour of the Anti smoking lobby.

Here are a few bites of the cherry:

The Antismoking Lobby has perfected the art of media sound bites. Short, sweet, sticky to the mind, almost totally void of meaning … but deadly in their effectiveness. They are just more lies though, and if you know them you can laugh when you hear them. Some to watch for:


Antismokers claim smoking causes 400,000 deaths a year. (Actually, this is a computer generated imaginary number. And half of those imaginary deaths occur after age 72 … almost 20% of them after age 85!)


Antismokers claim smoke contains 4,000 poisons and carcinogens.
(Actually, the EPA can only identify 432: the rest are theory. In toxicology “The dose makes the poison.” Nonsmokers never absorb enough smoke to even approach OSHA safety concern levels for any of them!)


Antismokers claim secondary smoke is just like Asbestos and Radon.
(Actually, sunshine, beer and sawdust are also all Class A Carcinogens.)


Antismokers claim that uncounted masses of hospitality workers are dying every year from secondary smoke.
(Actually, “uncounted” is absolutely right… they must all be stacked in a pile next to Saddam Hussein’s nukes and watched over by OJ’s “real killer.”)

You can read the whole article at the Encyclopedia.

It's an easy read, that you can print out and thrust in an antismokers face. (Preferably rolled up, end first).

Posted by The Filthy Engineer at 12:16 No comments: