I was bored. Then became furious.

I was just browsing the DECC (Department for Energy and Climate change) website for something to do, and came across some interesting statistics. In my view we are spending a fortune on bird mincers.

Of course you see the boast of how many they are building.

Between 2003 and 2010 there was a 143 per cent increase in generation from renewables in the UK, but faster rates of growth were recorded in Northern Ireland (652 per cent), Yorkshire and The Humber (287 per cent), East Midlands (258 per cent), North East (231 per cent) and South East (207 per cent) (see charts 11 and 12). For the individual technology groups some very large increases are recorded in percentage terms because in 2003 there was very little use of some of the technologies in various regions. 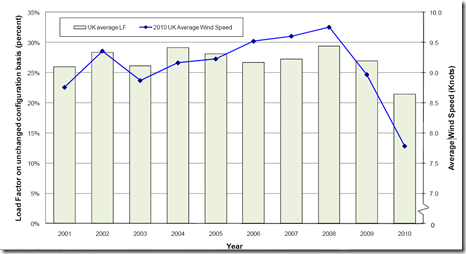 The first point I’d like to make is their inefficiency. They seem to be unable to reach their, so called, load rating. As you can see from the graph above, they are incapable of reaching even 30% of the maximum rated load. In the marine industry where I used to work we would never have put up with such. When commissioning generators after overhaul they were expected to deliver 100% power. In fact for a short period they were tested at 110% of full power.

The second point is if you look at the graph again you’ll see how susceptible they are variations in wind speed.

My third point is that nowhere on the website can I find how many turbines are non-operational. (Have a look if you want).

My final point is who pays for the cost of decommissioning?  Below is a small sample taken for offshore turbines 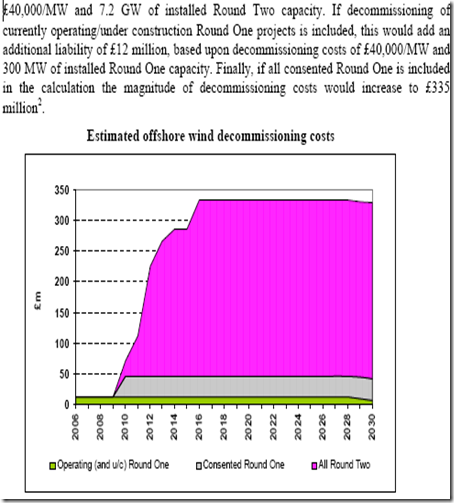 £40,000 fucking quid per megawatt. Bloody hell. Are they going to take them apart with tweezers? What’s wrong with a few kilos of semtex?

We really are being shafted.

1.The ratio of load to the maximum rated load.

Posted by The Filthy Engineer at 19:05 6 comments: