The Stillettoed Socialist: Brown introduced by glamorous Labour activist... who didn't even want him to be PM.

The glamorous activist who introduced Labour's manifesto has previously called for the violent death of Margaret Thatcher and for Gordon Brown to be removed as Prime Minister.

Ellie Gellard has over 3,000 followers on Twitter and includes Ed Balls, Sarah Brown and Alastair Campbell among her fans.

But the decision to ask the 20-year-old student to introduce Mr Brown at such as high profile event risked backfiring today.

Miss Gellard - who goes under the name 'Bevanite Ellie' on her website - last year suggested that she would like to see elderly Baroness Thatcher fall down the stairs on a skateboard.

READ it all and weep
Posted by The Filthy Engineer at 20:42 No comments:

I bet that if I was due in court, I would be turned down. At least The conservative peer hasn't claimed for aid. Yet. 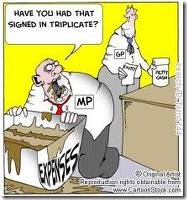 Three politicians accused of fiddling their expenses have won a bid to get the public to pick up their legal bill.

David Chaytor, Elliot Morley and Jim Devine are due to go on trial later this year accused of theft by false accounting.

They are accused of stealing almost £60,000 in allowances through false mortgage applications, rent claims and invoices for services.

Posted by The Filthy Engineer at 19:11 No comments:

A Liberal Democrat parliamentary candidate who is facing "serious" criminal allegations has been forced to stand down, it emerged today.

Liberal Democrat leader Nick Clegg said David Murray had "done the right thing" by withdrawing as the party's candidate in The Wrekin, Shropshire.

Posted by The Filthy Engineer at 16:18 No comments:

We are exactly one week in to Election 2010, and already the tabloids have got bored. They tried for the first few days: they gave plenty of pages to the coverage, they wheeled out their big shot columnists and they amped up the tribal invective. Sadly though, seeing as interesting events have so resolutely failed to occur, this early barnstorming gusto has swiftly tapered away into nothingness.

Posted by The Filthy Engineer at 15:08 No comments:

The once feared political operator Lord Mandelson - whose strategy backfired spectacularly when he attacked business leaders who opposed Labour's hike in national insurance - has blundered again.

Doctors fear that they are being used.

A doctor has complained that senior Labour figures are trying to pressure her into publicly backing the party against her will.

Posted by The Filthy Engineer at 11:13 No comments: