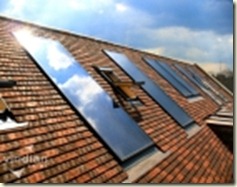 The Los Angeles Community College District would become a paragon of clean energy. By generating solar, wind and geothermal power, the district would supply all its electricity needs. Not only would the nine colleges sever ties to the grid, saving millions of dollars a year, they would make money by selling surplus power. Thanks to state and federal subsidies, construction of the green energy projects would cost nothing upfront.

Sounds too good to be true.

Oh Noes it is.

He overestimated how much power the colleges could generate. He underestimated the cost. And he poured millions of dollars into designs for projects that proved so impractical or unpopular they were never built.
These and other blunders cost nearly $10 million that could have paid for new classrooms, laboratories and other college facilities, a Times investigation found.
The problems with Eisenberg's energy vision were fundamental. For starters, there simply wasn't room on the campuses for all the generating equipment required to become self-sufficient. Some of the colleges wouldn't come close to that goal even if solar panels, wind turbines and other devices were wedged into every available space.

Weather and geology also refused to cooperate.
Three solar power arrays had to be scrapped because the intended locations were atop seismic faults.

And all you out there advocating Wind Turbines Bird Mincers.

Plans for large-scale wind power collided with the reality that prevailing winds at nearly all the campuses are too weak to generate much electricity. To date, a single wind turbine has been installed, as a demonstration project. It spins too slowly in average winds to power a 60-watt light bulb.

Do read about the whole sorry saga over THERE.

Posted by The Filthy Engineer at 13:31 7 comments: