There is talk about the Arab League imploring the UN to enforce a No fly zone over Libya. As far as I’m concerned all I can see is, one member of the Arab league, has offered four aircraft. I see Arab duplicity at work here. If all goes well then they can boast that they had a hand in liberating Libya. If it all goes horribly wrong then they can blame it all on the Evil western powers.

I’m not sure why we needed to get involved in the first place.

For Middle Eastern standards the armed forces of Saudi Arabia are relatively small. Its strength however is derived from advanced technology and not from numerical superiority. This is why the armed forces are under a continuing modernization program. The backbone of the fighter force is formed by 134 Tornados from which a batch of 48 Tornado IDS was ordered in 1993 under the al-Yamamah II program and 72 F-15S aircraft delivered from the mid-90s that operate besides the 41 F-15C/D aircraft delivered in the early 90s. Aircraft training is executed on the Pilatus PC-9, BAe Hawk, Boeing F-15D Eagle and the Northrop F-5F Tiger II. Like in many other countries the C-130 is the mainstay of the Transport fleet and the Hercules is assisted by CASA CN-235s. Reconnaissance is performed by 17sq with their RF-5E and the Boeing E-3A is the Airborne Early Warning platform operated by 18sq.

The fighter fleet of the Western Air Command of Abu Dhabi can be found on Al Dhafra Air Force Base, just east of the capital of Abu Dhabi. The remaining 34 Mirage 2000s are stationed here as well as the AH-64A Apache helicopters. The transport core is formed by Lockheed Hercules and Indonesian (IPTN/IAe) built CN-235 aircraft, all flying from Bateen Air Force Base. The UAE Air Force will be reinforced soon now the approval of the US congress enables the Lockheed Martin Aeronautics Company to deliver eighty new Block 60 F-16s that are officially designated F-16E/F. These Fighting Falcons are scheduled for delivery from 2004 through 2007. The UAE has an outstanding order for 30 Mirage 2000-9 aircraft, a customized version of the 2000-5 with additional air to ground capabilities. First deliveries have taken place in 2003. The United Arab Emirates Air Force & Air Defence also planned to upgrade its current fleet of 33 Mirage 2000s to the -9 standard and the first retrofitted Mirage 2000s are already active. Other recent development is the request for US Congress approval for delivery of two E-2C Hawkeye 2000 AEW platforms.

In other words the west is yet again going to be demonised for something the Arab world are incapable of doing. The trouble is we have a political class that seems that it must be seen do be doing something.

Well now that the West has done the difficult bit, lets hand it over to the Arab League.

Email ThisBlogThis!Share to TwitterShare to FacebookShare to Pinterest
Labels: libya 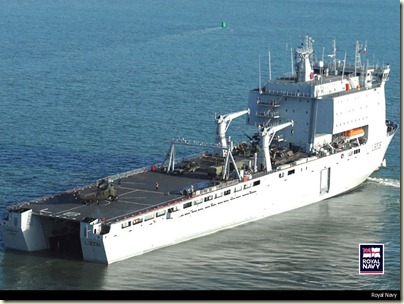 RFA Largs Bay pictured here in her docked down condition. This allows landing craft to drive into her dock. (Helicopter not included)

Posted by The Filthy Engineer at 12:53 2 comments: