Rally against debt. The Movie.

Alright this has been produced by UKIP, but the salient points are made on why the government of the day is being economical with the truth.

It’s my belief that we are being led into a world of hurt in the next few years. If we’re not careful we will become another Greece as our spending outstrips our GDP. 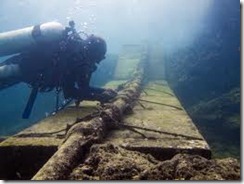 Oh dear. Not only the grout is failing in those monopile offshore wind turbines, but it looks like it could cost  even more due to the shortage of electrical cabling.

According to a new Wind Energy Update report titled Offshore Wind Installation & Construction, cabling currently accounts for between 8% and 10% of a project’s overall costs, but is at the root of 70% of insurance payouts. That means something is not going well.

And the penalties for errors are high. Cable installation costs are in the order of EUR€565 per metre and the high cost of vessels means any unexpected delays can have a significant impact on budgets.

For example, if every pull-in on an offshore wind farm with 180 turbines takes one hour longer than planned, at a typical cost of €170,000 a day the additional expense would mushroom to more than €2.5 million. Half a day’s delay each would mean €30 million-plus in costs.

There is some good news though.

That is not the only cause for concern, either. Some in the industry have wondered whether growing demand for subsea cables might put the brakes on the industry’s ambitious build-out plans over the next few years.

Hopefully they’ll bankrupt themselves. Before they bankrupt us.

Does the Buffoon Huhne ever get appraised of reports like these or does his army of sycophants carefully shield him from anything that might make him think differently?

There was an article this week about running a humongous cable across the North Sea to Norway. The idea was to use the wind energy to pump water from low level lakes in Norway to High level lakes. Then to use the potential energy therein to turn water turbine generators and generate electricity to transport the energy back to the UK when the Bird mincers weren't turning. I shook my head when I read that. The losses in the pumping and in the cables  would be horrendous. Who are these idiots? What’s the point of generating expensive energy and then losing a considerable percentage in losses?

And of course us, Joe public, will have to pay through the nose for this idiocy.

I think I need to lie down in a darkened room for the next ten years.