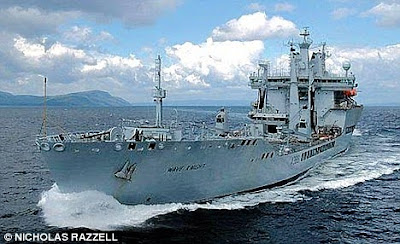 In todays Mail on Sunday there is an article about the inability of the RFA Wave Knight to prevent the rescue of the Chandlers. Read the article first before continuing

Details of the extraordinary stand-off on day six of the hostage crisis as the pirates attempted to transfer the pair from their yacht to their mother ship were disclosed by a member of the crew furious at the impotence of naval commanders.

The 31,500-ton Wave Knight sighted the Kota Wajar on the evening of October 28 and immediately tried to intimidate her by closing to less than 100 yards. At this point the Lynn Rival was not in sight so there were no hostages on board the pirate ship.

At this time the Wave Knight was not a threat to the wellbeing of the Hostages.

In an earlier statement to the press, the MOD had tried to assert that the civilian manned Wave Knight did not have the expertise to attempt force on the pirates. That statement is a load of utter Bollocks.

I left the sister ship, the Wave Ruler, in July, our last mission before setting of back to the UK, was those very same piracy patrols.

Much is made of the Wave Knight having a civilian crew, and gives the impression that the crew are amateurs with weapons. I beg to differ with that premise. On the Wave Ruler we were constantly exercising our weapons crews, including one live shoot per week. Incidentally we had a young stewardess who was not only highly proffesional with weapon firing procedure but was also superb at target destruction. (I know, as I have done the Royal Naval weapons maintainer course)

The truth I suspect is that even though there are clear rules of engagement, due to satellite communications, those back in the UK would have had their fingers in the till regarding the decision making at all times. In my opinion the Captain of the Wave Knight would have had his hands tied behind his back.

Every British home is to be issued with a ‘smart’ meter which calculates how much gas or electricity is used each time an appliance is switched on.

Families will also know how much they are spending minute-by-minute.

Guess who's behind this intrusive clap trap.

Details will be announced by the Energy Secretary Ed Miliband this week.

And it gets far worse.

Mobile phone technology will be used to transmit information on each family’s energy consumption to a central ‘hub’.

Now don't believe that the government wont have some input to the data. In the interest of "its energy strategy", or some other fatuous excuse.

Time to invest in a Large Hadron Collider, then turn it on and off at random intervals.

Posted by The Filthy Engineer at 11:38 4 comments: