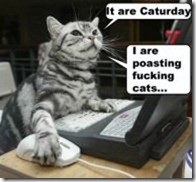 The younger Cat that owns this house has a problem with her coat. She moults for Queen and Country. Her fur ends up in a knotted mass and this young female has a rabid dislike of being brushed, combed, and generally handled.

Mrs FE had the bright idea of suggesting the local vetinary practice could take the pain and sort out the coat. (if you’ve ever been scratched by a demented cat, then you’ll know the pain).

So I took the bloody scrounging animal into the vet this morning, sat there for half an hour, and eventually managed to hand over the criminal for incarceration and a fur entanglement procedure.

Phone rings in the afternoon. “Can you pick up your cat”. OK I’ll do that.

If I’d known that they had to drug said cat, just to brush out the lumps of fur, I would have taken another course of action.

Why did they have to charge me £124 for an anaesthetic when I could have rendered the creature from hell, unconscious with a brick?

They’re worse than the dentistry profession.

Posted by The Filthy Engineer at 18:50 8 comments: