Put the cake down and stand away now!

A father sparked a security alert at Stansted Airport after the birthday cake he was carrying for his son tested positive for explosives.

I’d like to know how an X-ray machine could show up a cake as “suspicious” though? The offending confectionary. 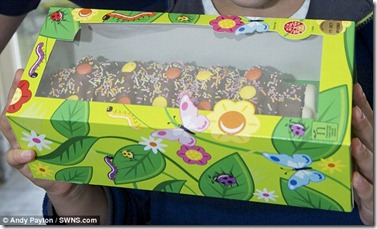 And they even go further.

'They found the chocolate Caterpillar cake inside my bag and swabbed the inside of the bag and put it into a little machine.

'That’s when it ended up going bleep and the customs officer said it had found traces of explosives.

'Everything was tested but it was just the cake box that was testing positive for traces of explosives.'

Mr Barrett was ushered into a room and ordered to produce his passport and strip off some clothing as more checks were done.

I dread it if he had been carrying Jelly. It might be classed as Jellynite.

Posted by The Filthy Engineer at 16:32 4 comments: