I see that there has been loads of sabre rattling at the TUC today. Strike Brothers, strike.

Well this blogger has seen it all before in the 1970’s, and remembers it well.

Remember the rubbish piling up in the streets? Well yes, but in fact most sensible people double bagged their rubbish, and left it in neat piles on the pavement.

Firemen’s strike? The armed  forces did a very creditable job with their ancient green goddesses.

Bodies piling up? Well yes, but in temporary mortuaries.

In fact we lived through those strikes with very little real hardship, mainly just a slight inconvenience.

The TUC would have us think that strike action would win this time. Well comrades you must have forgotten the lessons learned. Not only did new legislation,resulting from those strikes emasculate the unions, it kept the labour party out of power until we had the con-trick of New Labour in 1997.

Now that union membership has fallen by 50% since those days, you may, Comrade Crow, and you other Union oligarchs, find that you are fighting a battle that you can’t win.

So I’m laying down the gauntlet. Strike and be damned forever. And of course you’ll take the Labour party with you to the Ninth circle in hell.

Posted by The Filthy Engineer at 20:09 3 comments: 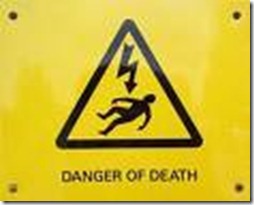 Tassya-Leigh Greener received burns to her thumb and fingers after the shock travelled along her arms but missed her heart.

The youngster had strayed into a derelict garden next to her sister’s home in Middlesbrough.

Her mother Sindy, 43, is now demanding answers from the firm that owns the unoccupied house.

'I am still in shock about the whole thing. So many children play round there. It could have happened to any child.' she stated.
'I nearly lost my daughter because they didn’t bother to disconnect the electricity or even cover the box. It’s terrible.

'I went outside and Tassya-Leigh was lying on the ground.
'She had been knocked about three feet back. We were all just in shock.

‘The doctors can’t believe it didn’t kill her,’ she added.

Just a couple of questions.

Why wasn’t the garden fenced properly, seeing that you had a two year old? If not, why weren’t you supervising said two year old?

Who the fuck, calls their child Tassya–Leigh?