Worried about losing your job?

Worried about the fall of the value of your savings due to inflation?

Worried about your investments dropping through the stock market floor?

Worried that you can’t afford to heat your home this winter, AND eat?

Worried that you’re going to fry due to Global Warming? (No actually. I just put that in to placate the warmists).

Worried that the nation can’t defend itself due to the defence cuts?

These pale into insignificance if you’re the PRIME MINISTER of Great Britain and Northern Ireland.

WE’RE ALL GOING TO DIE FROM PLASTIC BAGS, FFS. 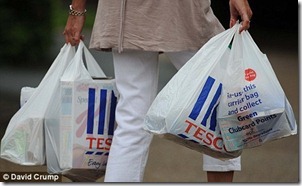 Britain’s biggest supermarkets are today given an ultimatum by the Prime Minister: Radically reduce  the number of plastic bags you hand out by choice, or I will force you to by law.

I was going to call him an idiot, but that would be a slur on idiots. He is below idiot level. (Is a cretin lower than an idiot?)

The Prime Minister says it is ‘unacceptable’ that the number of single-use carrier bags rose last year by 333million – a 5 per cent increase from the previous year. Environmental campaigners say the bags, used for only 20 minutes on average, take up to 1,000 years to degrade.

Well I for one, applaud the carrier bag manufacturers for increasing their sales by 5%. I sure other businesses would love that growth.

Who says that carrier bags are only used once? Where do they get those figures? I for one use the same carrier bag many times whilst trudging up to the local shop to replenish the whisky stocks. (Without which, this post would not be written. You can’t really believe the drivel I write on this blog can be done sober, can you?).

Who knows that they can last 1,000 years? Are there teams of archaeologists digging up old Roman carrier bags, whilst we speak? When is the exhibition going to be held in the British museum? Are we going to see a 500 year old plastic bag going for mega bucks on the antiques road show?

Mr Camermong. You should be trying to run the country, not sucking up to the Daily Mail, and trying to garner votes from those of a so called green persuasion.

* Trudges of into the other room to pour out another whisky*

What the papers say

Commenting on a complaint from a Mr. Arthur Purdey about a large gas bill, a spokesman for North West Gas said, 'We agree it was rather high for the time of year. It's possible Mr. Purdey has been charged for the gas used up during the explosion that destroyed his house.'
(The Daily Telegraph)

Police reveal that a woman arrested for shoplifting had a whole salami in her underwear. When asked why, she said it was because she was missing her Italian boyfriend.
(The Manchester Evening News)

Irish police are being handicapped in a search for a stolen van, because they cannot issue a description. It's a Special Branch vehicle and they don't want the public to know what it looks like.
(The Guardian)

A young girl who was blown out to sea on a set of inflatable teeth was rescued by a man on an inflatable lobster. A coast guard spokesman commented, 'This sort of thing is all too common'.
(The Times)

At the height of the gale, the harbourmaster radioed a coast guard and asked him to estimate the wind speed. He replied he was sorry, but he didn't have a gauge. However, if it was any help, the wind had just blown his Land Rover off the cliff.
( Aberdeen Evening Express)

Mrs. Irene Graham of Thorpe Avenue , Boscombe, delighted the audience with her reminiscence of the German prisoner of war who was sent each week to do her garden. He was repatriated at the end of 1945, she recalled -
'He'd always seemed a nice friendly chap, but when the crocuses came up in the middle of our lawn in February 1946, they spelt out 'Heil Hitler.''
( Bournemouth Evening Echo)

Mmmmmm. What else can I find?

Posted by The Filthy Engineer at 16:00 7 comments:

Peter Oborne on “That Idiot from Brussels”

You can watch a short clip here.

Or you can see the whole thing here at Newsnight.

Posted by The Filthy Engineer at 11:25 4 comments: