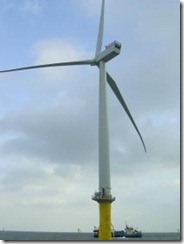 I’ve written before about the failures of offshore wind turbines before.

Apparently the grout failure problem is worse than first thought. From my source I quote the following:

Grout connections, based Densit’s Ducorit product, which sets to a strength similar to that of stone, ran into problems in 2010.

Then, IHS Emerging Energy Research reported that the grouting had started to dissolve on more than 60% of Europe’s offshore turbines, leading the machines to shift on their foundations.

So sixty percent of these turbines are in a dangerous condition.

of course they are trying a different solution for the new turbines. Will it work? Probably not.

“I am not at all convinced the new solution put forward by DNV will solve this problem,” says Golightly, an independent engineering consultant who has been working on offshore wind projects since 2010.

“Allowing what is essentially a brittle hollow cylinder of rock to take the full bending and shear force from the wave and wind loading that the turbines apply to the tower was simply a systemic design error decision, blindly followed by all developers and designers to save time and money.

“The bottom line is it is not good engineering to have two steel tubes joined with rock.”

I think a FOI request to DECC asking how many turbines are out of action is over due.

Posted by The Filthy Engineer at 22:31 4 comments: