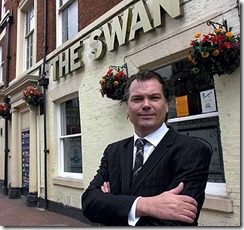 If you have not heard about this man then I'll tell you the story.

Nick Hogan ran two pubs in Bolton. However since the smoking ban came into force in 2007 he saw his trade melting away.

'Ninety per cent of people who come into my pub want to smoke, even the non-smokers think there should be a choice. These laws are ridiculous.'

He was vehemently opposed to this unfair legislation but on several occasions was visited by Gestapo inspectors and subsequently ended up in court.

Fine you say (pun not intended) but it got worse.

But the married father-of-two refused to pay the fine and yesterday, after repeatedly being hauled back before the courts, a judge sitting at Bolton Crown Court finally lost patience and jailed him.

Now you would have expected him to get a sentence of 1 month suspended or some such. After all if a peer of the realm can get 16 days suspended for a motoring offence causing death, then this would be the harshest sentence he could get.

Oh no. He has been given a full sentence of 6 months!

That is not justice as I see. That is "being made an example of" by the authorities.

To cut a long story short there is a campaign on the Blogosphere to raise the money for the fine and court costs. This should allow him to be freed.

If you feel sickened by this travesty of justice then you can donate over at Old Holborn's Blog. Just a pound will do, or more if you can afford it. (The Donate button is at the top right.)

If you can't afford it then at least write to Nick at:

Posted by The Filthy Engineer at 20:26 No comments:

Justice has left the room.

Just thought I'd post this You tube video to highlight Nick Hogans plight.

I bet the snitch who dobbed him in won't come forward and proudly proclaim it to all the world. The righteous never do. They do it from the shadows.

H/T tip to the Bigyinme

And if you wish to donate to the fighting fund to get him released go to Old Holborns blog. There is a paypal button in his sidebar. It's going well already. This just the start.

Posted by The Filthy Engineer at 10:40 No comments: