From a Cat's Diary

Day 983 of my captivity. My captors continue to taunt me with bizarre little dangling objects.

They dine lavishly on fresh meat, while the other inmates and I are fed hash or some sort of dry nuggets. Although I make my contempt for the rations perfectly clear, I nevertheless must eat something in order to keep up my
strength.

The only thing that keeps me going is my dream of escape. In an attempt to disgust them, I once again vomit on the carpet.

Today I decapitated a mouse and dropped its headless body at their feet. I had hoped this would strike fear into their hearts, since it clearly demonstrates what I am capable of. However, they merely made condescending
comments about what a 'good little hunter' I am. *******s.

There was some sort of assembly of their accomplices tonight. I was placed in solitary confinement for the duration of the event. However, I could hear the noises and smell the food. I overheard that my confinement was due to the power of 'allergies.' I must learn what this means and how to use it to my advantage.

Today I was almost successful in an attempt to assassinate one of my tormentors by weaving around his feet as he was walking. I must try this again tomorrow -- but at the top of the stairs.

I am convinced that the other prisoners here are flunkies and snitches. The dog receives special privileges. He is regularly released - and seems to be more than willing to return. He is obviously retarded.

The bird has got to be an informant. I observe him communicating with the guards regularly. I am certain that he reports my every move. My captors have arranged protective custody for him in an elevated cell, so he is safe. 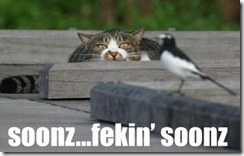 Not really my thing but I thought I’d bore you with some anyway. After all, we do need some culture in the Blogosphere.

FEMALE POEM
I want a man who's handsome, smart and strong
One who loves to listen long.
One who thinks before he speaks
One who'll call, not wait for weeks.
I want him to be gainfully employed,
When I spend his cash, be not annoyed.
Pulls out my chair and opens my door,
massages my back and begs to do more.
Oh! For a man who makes love to my mind
And knows how to answer "how big is my behind?"
I want this man to love me to no end,
And always be my very best friend.


MALE POEM
I want a deaf-mute nymphomaniac with huge boobs who owns an Off License and a speed boat. I know this doesn't rhyme and I don't give a shit.

Posted by The Filthy Engineer at 20:10 3 comments:

Climategate and the cover ups.

Andrew Montford has just published his report over the three enquiries into the conduct of business at the University of East Anglia.

Here is a brief summary of his conclusions.

These enquiries were hurried.

Insufficient care was taken with the choice of panel members to ensure balance and independence.

Insufficient care was taken to ensure the process was independent of those being investigated, eg the Royal Society allowed CRU to suggest the papers it should read.

Sir Muir Russell failed to attend the session with the CRU’s Director Professor Jones and only four of fourteen  members of the Science and Technology Select Committee attended the crucial final meeting to sign off their report.

His report in full is HERE

H/T to the Englishman

Posted by The Filthy Engineer at 12:56 3 comments:

Remember the article yesterday about the council that was going to refer a family to social services for a vicious crime against their seven year old daughter. The crime being, that they allowed her to walk 20 yards to school on her own. And, shock, horror, cross a road alone.

It is a 45-yard walk from school bus stop to front door and seven-year-old Isabelle McCullough’s parents were confident she could handle it alone.

Their home is in a quiet village and Isabelle had already been making the journey across the small 30mph road for the last year.

Unfortunately council officials disagree – and have warned the parents they face being referred to social workers if they do not escort their daughter to and from the school bus every day.

Well it would appear that the council are carrying out a screeching U turn.

Lincolnshire County Council has decided to take no further action over a father allowing his seven-year-old daughter to walk alone to a bus stop.

Of course we have the usual weasel words that it was only for the sake of the children.

Debbie Barnes, assistant director of Lincolnshire County Council's Children's Services, said: "The safety of children is the responsibility of everyone and where a member of staff brings a situation to our attention where the safety of a child or adult is compromised, we must react.

Here’s where it gets interesting though.

"NSPCC guidance states that children under eight should not be out alone; in this instance, a seven-year-old girl has been standing unaccompanied on a roadside and left to cross the road by herself."

What has any guidance from any non governmental body such as the NSPCC in this case, got to do with social services? And where do they get this figure of eight from? My children were quite happily walking a similar distance to school below that arbitrary figure. (I’ve Just walked it).

Of course the law of unintended consequences comes in.

"This has got so much public attention that we will have to be outside with her for the foreseeable future because now everyone knows there is a seven-year-old standing on the side of the road every morning.”

Nanny state at it’s best. Debbie Barnes. You are the weakest link. Goodbye.

Posted by The Filthy Engineer at 11:19 7 comments: