Well that's the workers at Cadbury's shafted for sure. Gordon "Jonah" Brown has said that he will ensure that jobs are not lost.

Mr Brown this morning said that his Government would act to ensure Cadbury's 6,000 UK employees were not sacrificed as Kraft seeks a return on its investment.

Why doesn't he shut the f**k up. Every time he visits, or pronounces on any company or enterprise it goes tits up within weeks. This is the end of chocolate as we know it. If you've never eaten yank chocolate, I can assure you, it is utter shite.

Update: I told you so.

Job losses are an "inevitability" at Cadbury after its takeover by US giant Kraft Foods, the UK firm's chairman has confirmed to the BBC.

Posted by The Filthy Engineer at 20:12 2 comments: 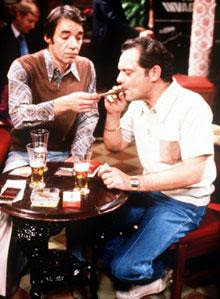 From an article about the censorship of "Only fools and horses" in the Telegraph.

* Senior civil servants have attacked Gordon Brown for his "barmy ideas". Thanks to a source close to No 10, I'm able to disclose a list of these ideas, all of which were due to appear in Labour's manifesto.

• Safeguard pupils from paedophiles by allowing nobody over the age of 12 to be employed in a school.

• Reduce carbon emissions by introducing a tax on breathing out. Guarantee that by 2025 a minimum 50 per cent of Britons will live solely via breathing in.

• Bring down crime statistics by making all crime legal.

* To me, however, Gordon Brown's barmiest idea was the one encapsulated in a headline on the Sky News website two months ago, during the deluge in the north of England. "PM Pledges to Help Flood Devastated Cumbria," it read. As if the sodden county hadn't suffered enough, here was Mr Brown, vowing to flood it even further.

Of course, it may just be that Sky News forgot to use an all-important hyphen.

Posted by The Filthy Engineer at 10:21 No comments: