The swine are at it again.

Not content with the Debacle of last year’s attempt to frighten us, the politicos are at it again.

Hospitals will be pushed to breaking point by a post-Christmas deluge of patients suffering from flu and the winter vomiting bug.*

Accident and emergency departments are bracing themselves for a surge of referrals as GP practices open for the first time after the extended bank holiday weekend.

They are also expecting high numbers of elderly patients to be brought in as they are visited by care workers for the first time in four days.

Soaring levels of both seasonal and swine flu will heap extra strain on hospitals already dealing with cases of the sickness bug norovirus, which usually peak at this time of year.

Remember last year when they predicted that thousands would die from the flue? What was the result? No more than usual.

Look you twats. Give the people the real information rather than “suggest” an outcome. What about some good news. Such as: “The Filthy Engineer has survived another festive season.”

This is scaremongering at it’s worst.

And I have been endowed with this most noble award 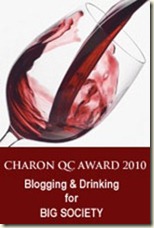 *Probably in my case, caused by imbibing too much of the demon drink*

Posted by The Filthy Engineer at 21:22 4 comments:

Charity giving is up to me.

They never seem to be able to stop hectoring us, can they?

Cashpoint users will be encouraged to donate to charity every time they withdraw money, under Government plans to encourage a more ‘giving’ society.

Shoppers could also be asked to make donations whenever they make a purchase, on the high street or online.

As far as I’m concerned what I do with my money after the Government has reduced me to near penury, is up to me.

Mr Maude said it was a key part of Tory plans to encourage a ‘Big Society’ in which communities provide more services themselves instead of relying on central government.

As I wrote in a previous post, I don’t want to be part of your “Big Society”. I just want to be left alone from the “Nudge” policy being used by those in power over us.

Where’s all this charity money going to go I wonder? Most likely to those Taxpayer funded fake charities such as ASH who just like to make my life a misery.

On a personal note.

Just Fuck Off and leave me alone.