Engineering as it used to be. Part 6 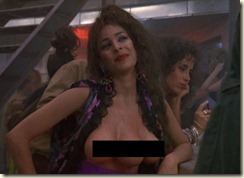 Oh right that’s where I was.

To cut a long story short, (Ninety days on the Beira patrol is not short, believe you me), we finally sailed for Singapore. To say that we didn’t pull the stops out is and understatement. The extra nozzles were opened to the turbine and all fires introduced into the boilers, propelling us along at 23 knots. (A Knot is a nautical mile per hour. A nautical mile is 1 minute of arc, on a great circle on the earth, just in case you’re interested*).

After that mad dash across the Indian Ocean we arrived at JSB. To the uninitiated that stands for “Johore straits buoy” and stands at the lower part of Singapore island. Here we picked up a pilot to guide us  round the shallow bits. Eventually we were tied up in the naval base and shore leave was granted.

Right. Where to go? Now of course it could be into the village and the seedy side of life, or. Or nothing, it’s the village of course. What hot bloodied teenager would pass up that option?

Just to set the scene.

Sembawang village consisted of a mixture of shops (Cheap), food stalls(Cheap), and Knocking shops bars. Obviously the first port of call was a knocking shop food stall for something to eat.

The food at the stalls was a mixture of Chinese and Malay and, my God was it good. As one that had existed on my mother’s food (God rest her soul), this was heaven. It didn’t even matter that the tables were next to what looked like an open sewer(Actually a monsoon storm drain), the food was nectar from the Gods.

That’s enough about food. What’s more important than cheap beer and cheap women? Nothing that I know of. When you think that the exchange rate was eight dollars to the pound and beer was fifty cents for a pint of Tiger, then you can imagine that paradise had arrived.

Now imagine that you were on a strip that had fifty percent of it’s properties as bars then you’re talking my kind of place. (Well not now of course).

Time to open the door to that world of beer, debauchery, and music.

Organise in your town or region -

A Cycle ride, a procession, a rally, a carnival, a fare…….

Workshops, a Talk, a Public Meeting

A publicity stunt or street theatre……
A Zero Carbon picnic…..

A lobby of your council
A Climate Emergency Teach-in,
A Zero Carbon how-to-get-there Teach in or debate

A presentation on the basis of the Centre for Alternative Technology’s Zero Carbon 2030 report.

A mixture of some of these….for instance take them in on a cycle or walking tour ..or

Aaaaaaagh. Make it go away

Posted by The Filthy Engineer at 13:31 5 comments:

Email ThisBlogThis!Share to TwitterShare to FacebookShare to Pinterest
Labels: osama

Posted by The Filthy Engineer at 10:17 2 comments: