Engineering as it used to be–part 5

I hope that you’re all sitting comfortably with your popcorn and drinks for my next instalment of how young and inexperienced I was in my younger days.

When I left you last I was on the motor ship, RFA Retainer. I spent approximately four months on that greyhound of the seas (If you can call 13kts, speed, then you’ll be under the impression that a tortoise can win the National,), and learnt all the essential engineering skills of drinking, drinking, and more drinking. Engineers were always warned that because of the high engine room temperatures, we should always ensure we kept up a high fluid intake. Of course we followed the leadership of the ship’s doctor, who not having anything to do, spent most of his time in the bar. He was our Role model in all things healthy.

I digress. This is not a post on drinking prowess. Oi. wake up at the back.

As I said, having settled in nicely, and really still hadn’t learnt the difference between a pump and a compressor, I received a shock that shocked me to the core.

I was going to be subjected to a “pier head jump”.

You can imagine what went through this callow youth’s mind. What had I done that was so terrible that I was going to have to undergo some sort of “walking the plank” punishment? Of course, if I’d bothered to read my terms and conditions, I would have realised that I was to serve on different types of ships in this phase of my cadetship. (Then again, how many teenagers read the bold print in their T & C’s, let alone the small print). A pier head jump just means a swift transfer.

God, I really am rambling now

I went whistling up the gangplank of RFA Tidereach…………………… 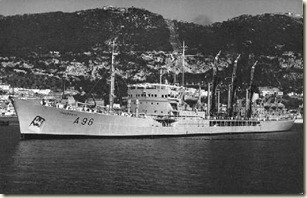 Not. As before I struggled up an even steeper gangway than the Retainer due to the Tidereach being low in fuel and therefore high in the water. Did I mention the heat and humidity in Singapore? Oh I did. OK.

This time I found my cabin slightly easier than the last ship. It was only hours, not days. However for some strange reason the cabin I was sharing with another cadet was in the forward accommodation, a deck below the bridge (That’s the bit that has the steering wheel). Strange seeing as my workplace, the engine room, was at the other end of the ship and at the bottom.

Eventually I was let loose into the machinery spaces………

What a contrast. It was quiet compared with the last ship’s engine room. Why may you ask? Because this ship had a different means of propelling itself through the water. It was steam powered. No big main Diesel Engine thumping away and diesel generators clattering like a horde of metallic banshees. No, just the hiss of superheated steam (800 deg F), and the whirring of the ventilation fans.

The Engine room was split into  two spaces, the boiler room and the turbine  room. The Boiler room (I’m adding a little bit of detail here as requested by a commentor on my last post), was filled with three large main high pressure boilers used for propulsion. These were Babcock Wilcox sinuous header boilers producing the steam for propulsion and steam to the steam steam generators which converted energy from superheated steam into non superheated steam to supply essential steam services whilst underway.

The remaining boiler was a scotch boiler which was a very worrying thing I learnt later. Not because it was tartan clad or anything, they just had a habit of blowing up if not watched carefully. Why you ask?

There are two types of boilers in use. Water tube boilers where the water flows inside the tubes are pretty safe, insofar that if a tube was to split very little water in comparison would fall into the furnace.

Not so with a fire tube boiler such as the Scotch boiler. In this type of boiler the fire goes through the tubes which are surrounded with several tons of water. 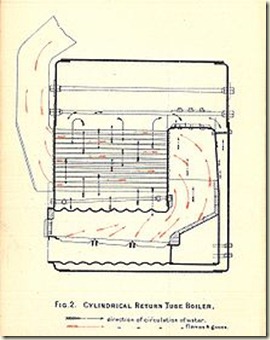 It was not uncommon for the water level dangerously falling, causing those tons of water to end up in the red hot furnace with catastrophic results. Usually turning those who were unlucky enough to be in the same space, into deep boiled lobster look- a -likes.

One novel side effect is that the the force of the steam generated in the furnace had a habit of propelling the boiler through the ship’s side at Mach 1 or more. This was not popular with ship’s captains as the big hole caused, usually meant the ship would sink. Captains hate that, as it is universally expected that the captain should go down with their ship. (Bugger being the Captain, I would just clamber over the wimmin and cheeldren and get in the first available life boat. After all I’m young and my parents love me, etc, etc).

Am I being to technical or alarmist?

Then again those other boiling machines were not with out their downside. Steam at 800 deg F and at  a pressure of 600 Psi can hurt you slightly. It was a case that if you heard a whistling noise in front of you, you didn’t assume it was a stoker in a good mood. More likely that if you continued you were likely to have some part of you expertly amputated by the steam leak you were too stupid to avoid. (The wound was well cauterised, therefore the ship’s doctor might be able to save your life. If he wasn’t too pissed).

I know that you’re just waiting for the smutty bit. You’ll just have to wait.

Posted by The Filthy Engineer at 20:06 9 comments:

These are classified ads, which were placed in a U.K. newspaper:

Father is a Super Dog, able to leap tall fences in a single bound.

Worn once by mistake.

FOR SALE BY OWNER.

Statement of the Century

"If women are so bloody perfect at multitasking, how come they can't have a headache and sex at the same time?"

Posted by The Filthy Engineer at 14:14 3 comments: