Meg was the name of my girlfriend
And gig was a job for the nights
Now they all mean different things
And that really mega bytes.

An application was for employment
A programme was a TV show
A cursor used profanity
A keyboard was a piano.

Memory was something that you lost with age
A CD was a bank account
And if you had a 3 inch Floppy
You hoped nobody found out.

Log on was adding wood to the fire
Hard drive was a long trip on the road
A mouse pad was where a mouse lived
And a backup happened to your commode.

Posted by The Filthy Engineer at 19:46 2 comments: Links to this post

Email ThisBlogThis!Share to TwitterShare to FacebookShare to Pinterest
Labels: poetry


Why do we call the last group Generation Y? 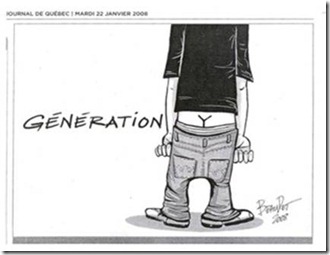 Posted by The Filthy Engineer at 11:19 No comments: Links to this post