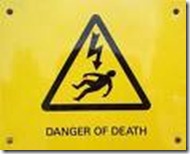 FE has just received a letter from his energy provider appraising him of price rises in August. I wonder how many people actually look at the figures given and calculate the actual rises overall.

To begin with the increase in electric supply seems to be a very good deal indeed. A 1% rise for both peak and off peak periods. Not bad I hear you say.

But we come to the gas tariff. A whopping increase of 20%.

And that’s not all. The daily service charge for gas has gone up by 26% and the electric by a humungous 79%.

I wonder how much of that is made up in green taxes?

I’ll give it a month to allow the cartel of energy providers to set their final prices and then goodbye Scottish Power.

Anyone else had rises in line with this?

As you’ll know I’ve been away for a while. It’s been a busy two weeks fraught with house moving and hospital visiting. The house move went well, though it was a good thing that I brought my tools. What I can’t understand, is why take the curtain poles, but not the brackets that support them?

The Hospital thing was not so much fun. Master FE was admitted last Sunday for removal of his cancerous thyroid. The operation was carried out on Monday morning and we visited that evening when he was out of the recovery room, and back on the surgical ward. What a sorry sight to behold. Our strapping 6’ 1” son, barely awake with oxygen tubes down his nose, a drip in his arm, and drainage tubes from the site of the operation.

We visited the following afternoon and were amazed to find him propped up in bed, completely lucid, no tubes and only some discomfort. What was even more amazing was to find him in the evening cross legged, surfing the internet on my laptop!

It was a while however, before he could be discharged as his calcium levels defiantly refused to stabilise. (A side effect of thyroid removal). It was thought that he would have to stay in till today. However a phone call from the boy on Saturday morning revealed that they’d  got fed up with him and he was being discharged.

Posted by The Filthy Engineer at 13:16 9 comments: