In no way is this post mocking what our forebears did. It’s just to show that even in the dark days of WW2. They just learnt to adapt in what was the truly British way. 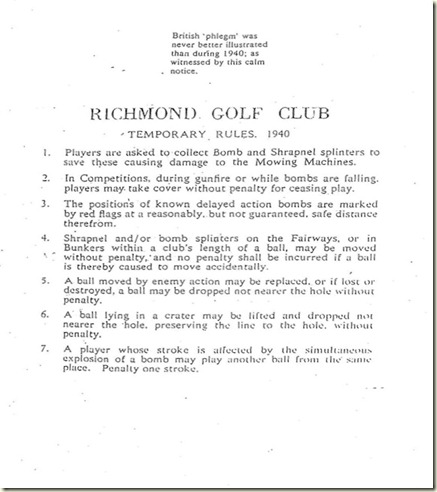 My favourite is Rule 7.

Note: Both my Grandfathers spent many years alternating as Captain of their club.

Sorry for the poor definition.

Posted by The Filthy Engineer at 19:39 2 comments:

On the day we honour our dead we get this. I wonder if the craven BBC and the Police will cover it

Posted by The Filthy Engineer at 09:23 4 comments:

On November 11, 1999 Terry Kelly was in a drug store in Dartmouth, Nova Scotia. At 10:55 AM an announcement came over the store’s PA asking customers who would still be on the premises at 11:00 AM to give two minutes of silence in respect to the veterans who have sacrificed so much for us.

Terry was impressed with the store’s leadership role in adopting the Legion’s “two minutes of silence” initiative. He felt that the store’s contribution of educating the public to the importance of remembering was commendable.

When eleven o’clock arrived on that day, an announcement was again made asking for the “two minutes of silence” to commence. All customers, with the exception of a man who was accompanied by his young child, showed their respect.

Terry’s anger towards the father for trying to engage the store’s clerk in conversation and for setting a bad example for his child was channeled into a beautiful piece of work called, “A Pittance of Time”.