Smoking out my MP 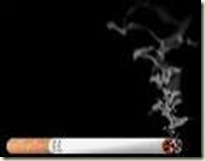 Some while ago, February 18th to be exact, I wrote to my MP. Below is a short piece of it.

You'll have to forgive the loose format. Blogger is buggering me about.

not welcomed to do so. I am now in my mid 70's and can
now only smoke either at home or in the open air. I am now
disabled (accident damaging my hip) and so can not get out
as much as I would like to.
So now I only smoke in my own home. This is a very lonely
existence and I would love to be able to go to a pub for a drink
occasionally. However, as a smoker I know that I can't do
this and enjoy a drink and cigarette in safety and comfort in a pub.

I accept all this and am sorry that my pleasure upsets so many people.
I wish that my life was different,  but after smoking for over 60 years
it is difficult to stop.

It really hurts me to hear that smokers are now classed as
disgusting filthy death carriers as I really hadn't considered
myself to be thus.

Now that I am all these horrible things I am glad that I am
nearing the end of my life. How cruel and malicious are
these people that have ostracised me and cast me out from society.

I am so sorry if my 'habit' has offended people and wish that I
had never taken that first cigarette all those years ago.”

Thank you for your letter of 2 March enclosing correspondence
from your constituent Mr Filthy Engineer of Filthy Mansions, Somewhere in Kent,
about smokefree legislation.The smokefree provisions in the Health Act 2006
were carriedout in free votes across all parties by large majorities
in both Houses of Parliament. This Parliamentary support for smokefree

legislation reflected the very widespread public support.
The primary aim of the legislation was to protect workers and the
general public from exposure to the harmful effects of secondhand smoke.
Medical and scientific evidence shows that exposure to secondhand smoke
increases the risk of serious medical conditions such as lung cancer,
heart disease, asthma attacks, childhood respiratory disease,
sudden infant death syndrome and reduced lung function.
Smoking is the largest single cause of preventable illness and premature
death in the UK. It kills over 100,000 people every year and a recent
academic study suggests that the cost to the British taxpayer is more
than £5billion a year.

Note the first bit if disinformation in the second paragraph.”reflected the
very widespread public support.” Well I wasn’t consulted, nor was
anyone I know.


The second paragraph is more waffle not facts. Notice the phrase that is
used by the bansturbators of all colours.  “ increases the risk”. I would like
to know Mr Lansley how you can state that asthma attacks are increasing
and blame it on SHS, when the percentage of smokers has fallen dramatically
in the last 50 years.


What about having  a look at this study which I think may have some small
bearing on our health. What are you doing about that? Nothing.


As for the last paragraph even that arch antismoking group ASH (January 2011)
doesn’t agree with that made up figure of £5 billion..

Smoking costs the National Health Service (NHS) approximately
£2.7 billion a year for treating diseases caused by smoking.
About 76% of the price of a packet of cigarettes consists of taxation.


And as for the reply from my MP enclosed with that letter.
Just a note from one of his minions.

Oh well, time for a blood pressure pill, and shortly a large whisky or two.*


*And you too can bugger off, Alcohol Concern, if you read this.

Posted by The Filthy Engineer at 18:49 4 comments:

If you yelled for 8 years, 7 months and 6 days you would have produced enough sound energy to heat one cup of coffee.
(Hardly seems worth it.)

If you farted consistently for 6 years and 9 months, enough gas is produced to create the energy of an atomic bomb.
(Now that's more like it !)

The human heart creates enough pressure when it pumps out to the body to squirt blood 30 feet.
(O.M.G.!)

A cockroach will live nine days without its head  before it starves to death.    (Creepy.)
(I'm still not over the pig.)

Banging your head against a wall uses 150 calories an hour
(Don't try this at home, maybe at work)

The male praying mantis cannot copulate while its head is attached to its body. The female initiates sex by ripping the male's head off.
(Honey, I'm home. What the...?)

The flea can jump 350 times its body length.. It's like a human jumping the length of a football field.
(30 minutes. Lucky pig! Can you imagine?)

Some lions mate over 50 times a day.
(I still want to be a pig in my next life...quality over quantity)

Butterflies taste with their feet.
(Something I always wanted to know.)

The strongest muscle in the body is the tongue.
(Hmmmmmm......)

Right-handed people live, on average, nine years longer than left-handed people.
(If you're ambidextrous, do you split the difference?)

Elephants are the only animals that cannot jump.
(Okay, so that would be a good thing)

A cat's urine glows under a black light.
(I wonder who was paid to figure that out)

An ostrich's eye is bigger than its brain.
(I know some people like that.)

Starfish have no brains
(I know some people like that too.)

Polar bears are left-handed.
(If they switch, they'll live a lot longer)

Humans and dolphins are the only species that have sex for pleasure.
(What about that pig??)

Posted by The Filthy Engineer at 12:01 6 comments: