Toiling in the mens’ room. 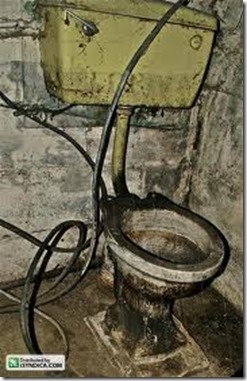 And the ladies room for that matter. Toilets in FE towers are unisex. I wouldn’t like to be classed as anti feminist.

Let me cut to the chase, though you’ll wish I hadn’t.

There was one of those little jobs that I have been meaning to get around to for some weeks. Fixing the downstairs Loo. (Toilet for those who are not used to colloquial English).

The problem with this porcelain edifice was that it was failing to flush without handling the flushing lever like a demented person who has been affected by Sarin nerve gas. (Topical).

Now my cistern is of the type that has a little silver handle on the front, that when activated, empties the contents in one fell swoop into the toilet bowl. Thus flushing the accrued detritus away in one foul swoop. (Hah).

Amazingly when I interrogated the web site of a well known purveyor of DIY items (Starts with a “B” & ends with a “Q”), nowhere could I find a simple, one flush mechanism. They seem to think that we all want a duel flush system. Having had to unblock the bathroom toilet on boxing day two years ago has turned me off from these spawns of  Satan.

However another well known DIY store (Begins with “Home”) actually had what I needed.

Bye now your thinking that I’m going to tell you some tale of woe as the post about my plumbing exploits I regaled you with. Far from it. I sailed through the replacement without a hitch.

I won’t be caught twice.

You can got to sleep now.

Posted by The Filthy Engineer at 21:27 3 comments:

What comes around, goes around.


Posted by The Filthy Engineer at 09:56 No comments: