The bit they ignored in the IPCC executive summary.

While perusing some of the review comments to the IPCC’s Fourth Assessment Report, I came across the contributions of Andrew Lacis, a colleague of James Hansen’s at GISS. Lacis’s is not a name I’ve come across before but some of what he has to say about Chapter 9 of the IPCC’s report is simply breathtaking…

Remember, this guy is mainstream, not a sceptic, and you may need to remind yourself of that fact several times as you read through his comment on the executive summary of the chapter:

Here's what he wrote:

There is no scientific merit to be found in the Executive Summary. The presentation sounds like something put together by Greenpeace activists and their legal department. The points being made are made arbitrarily with legal sounding caveats without having established any foundation or basis in fact. The Executive Summary seems to be a political statement that is only designed to annoy greenhouse skeptics. Wasn’t the IPCC Assessment Report intended to be a scientific document that would merit solid backing from the climate science community – instead of forcing many climate scientists into having to agree with greenhouse skeptic criticisms that this is indeed a report with a clear and obvious political agenda. Attribution can not happen until understanding has been clearly demonstrated. Once the facts of climate change have been established and understood, attribution will become self-evident to all. The Executive Summary as it stands is beyond redemption and should simply be deleted.

And what did they do with this review? You guessed it. They rejected it.

Posted by The Filthy Engineer at 20:42 No comments:

The Cheeldren are at last coming to their senses. 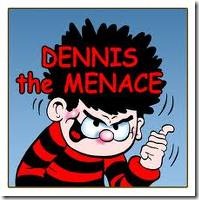 Well at least one of them.

An eight-year-old Beano fan has made a stand against PC killjoys who made his hero Dennis the Menace too nice.

Jacob Rush pleaded with the comic's bosses to return the spiky-haired character to his former naughty best after he was turned into a bit of a softy.

It's about time that someone actively complained about the Nanny state. It's a shame it has to be an eight year though. Of course he can't be prosecuted for inciting violence or hate crime.

Jacob, from Ipswich, Suffolk, said: ‘I don't like Dennis because he doesn't have his catapult or water pistol any more and he's not menacing enough - I want the old Dennis back.

The BBC makeover saw Dennis transformed into a politically correct shadow of his former self.

Personally I would like to see a grown up Dennis gunning down the Editorial board at the BBC, with an AK47 assault rifle. That's just my opinion.

Posted by The Filthy Engineer at 20:25 No comments:

By Hook or by crook they've got the money back.

This has partially brightened my day up. 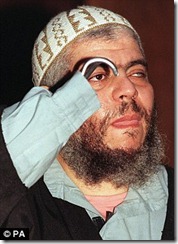 Legal aid bosses have seized the house belonging to radical cleric Abu Hamza to pay off some of his defence costs.

The Legal Services Commission appropriated the property in Greenford, west London, despite Hamza claiming it did not belong to him.

Of course it would make my day if he lost his appeal against extradition to the USA.

Posted by The Filthy Engineer at 15:26 No comments: