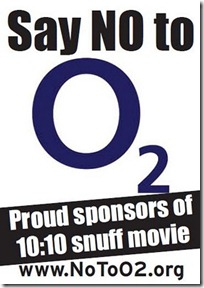 There is a campaign starting on the EUREFERENDUM blog to shame O2 into stopping sponsoring the 10:10 organisation.

Posted by The Filthy Engineer at 15:01 4 comments: 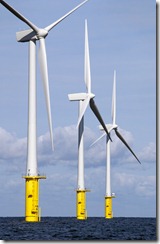 In previous posts I iterated that the costs of Operation and maintenance was at best understated, if not unknown.

However another item of the structure of wind farms is of concern as well.

I.E. Once you’ve produced all that power from the infernal bird mincers, you’ve then got to transmit it ashore and into the grid.

Cables may serve as an offshore wind farm’s umbilical cord but it doesn’t take much neglect, inexperience, substandard planning or lack of resources to suddenly transform them into cost-sapping Achilles heels.

There are three main problems to contend with.

These include breaks “caused by vessel movements and inexperienced crew”; cable loops “due to vessel movements, lack of control or bad equipment and software”; and cables being cut short “due to people not using the right measurement techniques and methodology to install the second end – when you get to the second end you should know how much to the meter is required”.

And on the maintenance of this cable.

“If you have a damaged export cable and you don’t have a maintenance model in place – what are the vessels that are going to repair it, is there spare cable around, do you have jointing expert available – if that hasn’t been worked out you could be down for months,”

Experienced Engineers are numerous it would seem.

But while technological necessity, planning and implementation methodologies and industrial up-scaling will inevitably evoke all manner of capital complexities, the real issue is likely to be people. Or rather the distinct lack of them.

Bit of a muddle really.

Posted by The Filthy Engineer at 13:47 2 comments: 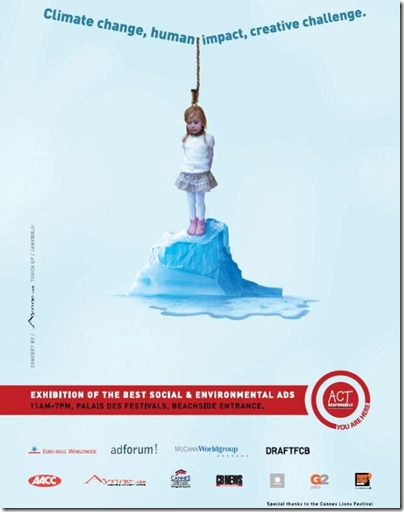 The website is here. Just think of the Cheeeldren again.

Posted by The Filthy Engineer at 09:45 3 comments: