No, No, not from blogging. (as much as some of you might wish that I did stop blogging. After all, you can only stand so much from a senile, dribbling, pensioner in his dotage).

No. Just to round off today, with a bit of culture. You know you need it. Yes I mean you at the back. Pay attention and stop ogling that bird's boobs.

Labour MPs awarded legal aid to fund their court battle against charges that they fiddled parliamentary expenses will have to pay the money back, Prime Minister Gordon Brown said.

Oh yes and how is he going to get them to do that, I wonder? Appeal to their better nature I suppose?

"I think the evidence is that people in their position will have to pay back the money - or most of the money - they get in legal aid.

That really is a load of bollocks. It is being phased in and not all courts have carried it out yet. The usual soundbite politics from the deluded, monocular twat.

He's changed his tune now. Or at least showing his true colours.

Enterprise tsar Lord Sugar has donated £400,000 to the Labour Party, he announced.

The Labour peer said he gave the boost to the party's coffers to assist with its running costs during the General Election campaign.

Lord Sugar, star of BBC show The Apprentice, said he had donated cash during previous campaigns.

In a statement released to the Press Association, he said: "I can confirm that I have today agreed a donation of £400,000 to the Labour Party.

When he was ennobled he publicly proclaimed that he would be politically neutral. That didn't last long did it.

The telegraph is having an online debate about reform of the smoking ban. Worth going over there to register your protest.

Early days but the voting is 38 to 8 in favour of reform.

Posted by The Filthy Engineer at 14:51 2 comments:

You really wonder why people have no shame. 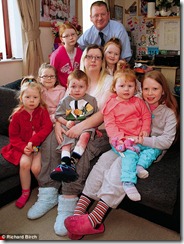 Father-of-seven Peter gave up work because he could make more living on benefits.

Yet he and his wife Claire are still not happy with their lot.

With an eighth child on the way, they are demanding a bigger house, courtesy of the taxpayer.

Oh and there are more hell spawn on the way. She wants 14. FFS.

She's earned the right though. No she hasn't. She's never had a full time job in her life. *spits*

And of course they have to live frugally. Nope.

At their semi on the Isle of Anglesey, the family have a 42in flatscreen television in the living room with Sky TV at £50 a month, a Wii games console, three Nintendo DS machines and a computer - not to mention four mobile phones.

And they have contempt for the hands that feed them.

'It doesn't bother me that taxpayers are paying for me to have a large family,' added Mrs Davey.

'We couldn't afford to care for our children without benefits, but as long as they have everything they need, I don't think I'm selfish. *spits again*

Go and read the rest of this depressing story. Over in the Daily Fail.

Posted by The Filthy Engineer at 12:42 No comments:

Former Royal Navy seaman who swears at politicians on TV gets Asbo.

A former Royal Navy seaman has been given an Asbo – to stop him swearing at politicians when they appear on his TV or on the radio.

Martin Solomon, 64, has already spent the past two weeks in prison waiting to be sentenced after admitting he had breached a previous Asbo by shouting and swearing loudly in his home in Stroud, Gloucestershire, and disturbing his neighbours last month.

Posted by The Filthy Engineer at 10:38 No comments:

Bevanite Ellie does U turn.

A young Labour supporter who helped launch the party's manifesto has explained why she criticised Gordon Brown in a blog written two years ago.

Ellie Gellard, 20, called for the Prime Minister to quit in the 2008 blog, following Labour's by-election defeat in Glasgow East.

Posted by The Filthy Engineer at 08:24 No comments: