My local council is considering dimming or even switching some of the county’s street lights to save money. A position that I don’t think they have thought through.

All that happens in a simple dimming system is that you exchange lots of light and heat for less light and loads more heat. This defeats the object of saving power.

An ordinary resistor is a piece of material that doesn't conduct electrical current well -- it offers a lot of resistance to moving electrical charge. A variable resistor consists of a piece of resistive material, a stationary contact arm and a moving contact arm.

As the charge works to move through the resistor, energy is lost in the form of heat. When you put a resistor in a series circuit, the resistor's energy consumption causes a voltage drop in the circuit, decreasing the energy available to other loads (the light bulb, for example). Decreased voltage across the light bulb reduces its light output.

The problem with this solution is that you end up using a lot of energy to heat the resistor, which doesn't help you light up the room but still costs you. In addition to be being inefficient, these switches tend to be cumbersome and potentially dangerous, since the variable resistor releases a substantial amount of heat.

TFE note: There are no, dimmers fitted in my area as there was never considered  any justifiable cost.

Apart from the obvious dangers of  the running down of pedestrians on a more regular basis, there may be legal ramifications. Consider the 30 MPH speed limit in towns, villages and cities. There is more than just the signage to consider.

The Beak: “Mr Filthy Engineer. You were stopped for exceeding the 30 MPH speed limit. How do you plead?”

(Stunned silence in court as everyone rushes out to get popcorn.)

TB: “Please state your reason for your plea as we have the statement from two Officers that you were at the time exceeding the limit”.

TFE: “I didn’t know there was a limit, your honour. I’ve never driven through that area before”.

TFE: “Maybe that was when I had a sneezing fit.”

TB: “But didn’t you see the street lights?”

TFE: “There were no street lights”.

TB: “How can you say that? They are clearly visible”.

TFE: “Not when it’s raining, dark, and it’s a cloudy night. AND the bloody things are switched off”.

\i must stop droning on about deliveries. 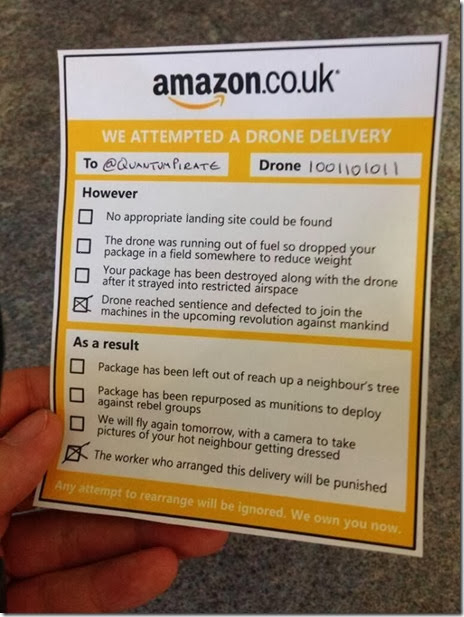