This better be an April fool's spoof. 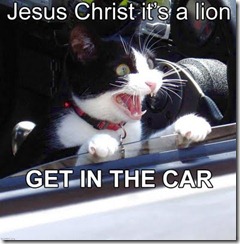 As part of the review of legislation concerning dogs, a new proposal has been released with the intention of banning smoking in pet owners’ homes. A spokesperson for DEFRA is quoted as saying “Under the Animal Welfare Act 2006, if a pet owner knowingly exposes a pet to a risk of disease, they are committing an offence. Smoking in the presence of a pet will inevitably expose the animal to known irritants and carcinogens, which are likely to cause both disease and suffering to the animal.”

Local authority and RSPCA officers have already been instructed to investigate possible instances of smoking in pet owners’ homes. If smoking is proven to have taken place, the pet owner will be given two options: surrender of the animal into local authority care, or confiscation of all smoking materials.

That's the cats out on the streets then. (Mind you it's going to save me a lot of money in not buying cat food. Think of all the extra Baccy I will be able to afford.)

Mark my words they would try if they thought they'd get past my cricket bat.

Posted by The Filthy Engineer at 20:18