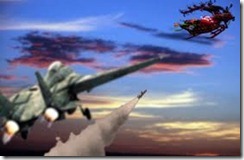 Red-faced U.S. Air Force officials admitted today that they accidentally shot down Santa Claus' sleigh and severely injured Santa and most of the reindeer as the sleigh hovered over a field near Edwards Air Force Base in California.

"We admit the error but we that does not alleviate Mr. Claus of his own responsibility", stated Col. Jerry Gandy, 95th Air Base Wing commander.

Gandy said that Santa is allowed his yearly trek across North America under the conditions that he clearly identify his sleigh, retains radio contact with Air Force officials and remains at least 300 yards from any airports or U.S. Air Force installations.

"I radioed my coordinates well in advance and I was just outside the 300 yard perimeter", Santa stated from his hospital bed where is listed in stable condition recovering from bullet wounds, spinal damage, bruises and contusions. "I think this was a deliberate act by the U.S. Government to prevent Christmas from happening this year".

Gandy also stated that Santa's sleigh was not clearly identifiable as it had no distinguishing identification tags.

"That's ridiculous", Santa stated. "How many other damned sleighs are there out there being pulled by a pack of reindeer?"
Hospital officials say that Santa is expected to make a full recovery and veterinary officials state the same for the reindeer, except for Rudolph.

"I'm afraid Rudolph's nose was blown off", said one of the veterinarians on condition of anonymity. "We can build him a new nose but it won't have that trademark red glow".

President  Barack Obama said that he will discipline the air force officials over this outrage.
"I won’t get the Wii I asked for this year because of them", Obama stated.

Posted by The Filthy Engineer at 15:44

Email ThisBlogThis!Share to TwitterShare to FacebookShare to Pinterest
Labels: Santa