Smoking on a ship. 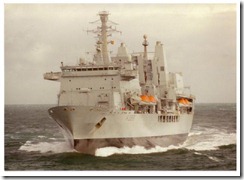 Ten years ago I served on the Royal Fleet Auxiliary (RFA) ship “Fort George”. This type of vessel was configured to carry a cargo of ammunition, fuels which included diesel and aviation spirit (Avcat), and dry stores. There was no smoking allowed on the open decks for the obvious reason that there could be pockets of inflammable gases.

That last bit always had me slightly bemused as the ship’s original fit was to have included a vertical launch anti air, missile system situated in the middle of the ship (The silo is still there, they just ran out of money). Imagine firing a metre long projectile with a white hot tail of incandescent gas smack bang through the ship’s gas envelope. If you were the enemy you’d only need to pretend to attack. Your target would self destruct for you.

I digress.The then smoking rules allowed you to smoke anywhere inside the Accommodation, Office areas, the Bridge and the MCR (Machinery Control Room).

Slowly but insidiously change happened. Firstly smoking in multiple occupancy offices were banned. Next came a ban on smoking in alleyways, and the MCR and the Bridge. After that smoking in bars was outlawed if food was served. FFS, that was snuck in because we had packets of crisps on sale.

And finally we were not allowed to smoke in our own cabins in case the steward sued over passive smoking. (Yes, Officers still had stewards). That was the final straw for me. I could have worked on, but instead I thought Sod you and retired. (Which I don’t regret as the march of regulation was bordering on the farcical).

The point of this post is, If you remember my first paragraph about no smoking on deck, you’ll be as bemused as me that the only place where smoking is allowed now, is a designated area on the open deck.

What really pisses me off is that in all the conflicts I’ve been involved in, (Aden, the Falklands, Gulf wars one and two and Angola) passive smoking would be the last thing on anyone’s mind.

But Hey, we live in a world of irrational fear.

In a nut shell political correctness trumps health and safety.

Posted by The Filthy Engineer at 19:42 5 comments:

Bill Stickers Will Be Prosecuted

Just defending Bill who had to flee the UK. The scene is quite familiar. A small, non-franchised shop on the high street that was there yesterday suddenly ceases to exist. Any clues as to its previous use are quickly removed, and old, yellowed pages of newspaper spontaneously appear in the window, blocking any view of the interior. You look upwards to see that an 'A1/A3 business to let/buy' sign now juts out from the first floor of the building, but this does little to explain what suddenly seems like the end of an era. Legend has it that this 'A1/A3 business' business is to do with the property's licenses but, since you're not au fait with such things, it doesn't really help. Most people would give up and walk away at this point, but you decide to take a closer look and are rewarded with the cryptic message:

Bill Stickers Will Be Prosecuted.

Has the shop's owner done something particularly dastardly? When will the court hearing be? Did he actually look like a Bill in the first place? Further inspection reveals that someone has scrawled 'Bill Stickers is innocent' underneath. You are intrigued, and head off to tell your friends about it – maybe you can start a campaign to save the poor fellow. Unfortunately, they all laugh at you, and you spend the next fortnight answering enquiries as to the welfare of 'your mate Bill'.

Having endured for more than a century, this sort of confusion was thankfully ended by a move towards using the phrase 'Stick No Bills', though gullible individuals may as a result wonder why anyone would want to attach grown men to a shop window. Alternatives such as 'Post No Bills' may prove even more confusing, and it is likely that an ideal solution to the matter is still a long way off.