The supposed ‘consensus’ on man-made global warming is facing an inconvenient challenge after the release of new temperature data showing the planet has not warmed for the past 15 years.

The figures suggest that we could even be heading for a mini ice age to rival the 70-year temperature drop that saw frost fairs held on the Thames in the 17th Century.

Based on readings from more than 30,000 measuring stations, the data was issued last week without fanfare by the Met Office and the University of East Anglia Climatic Research Unit. It confirms that the rising trend in world temperatures ended in 1997. (My embolden)

That was kept pretty quiet. The article goes on:

According to a paper issued last week by the Met Office, there is a  92 per cent chance that both Cycle 25 and those taking place in the following decades will be as weak as, or weaker than, the ‘Dalton minimum’ of 1790 to 1830. In this period, named after the meteorologist John Dalton, average temperatures in parts of Europe fell by 2C.

However, it is also possible that the new solar energy slump could be as deep as the ‘Maunder minimum’ (after astronomer Edward Maunder), between 1645 and 1715 in the coldest part of the ‘Little Ice Age’ when, as well as the Thames frost fairs, the canals of Holland froze solid. 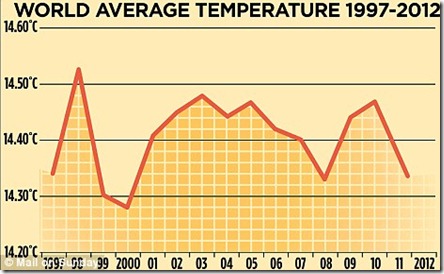 Time to buy a new coat.

Posted by The Filthy Engineer at 14:04