It’s about time they fired this lefty “Quangoqueen”. 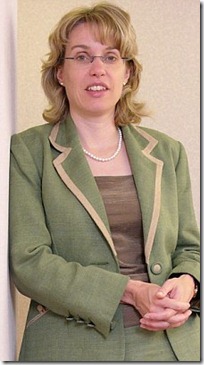 Jenny Watson is to be told by ministers her tenure as a board member of the Audit Commission, the local authority spending watchdog, will not be renewed.

Mind you they should have sacked her from her day job as well.

The 46-year-old, who was dubbed the 'Modern Militant' thanks to her work at a string of quangos under Labour, earns £100,000 a year as head of the elections watchdog, the Electoral Commission.

It would seem that she is a a leader in her field at sucking on the public teat. She certainly has it down to a fine art.

She’s certainly got around.

Posted by The Filthy Engineer at 16:22

Email ThisBlogThis!Share to TwitterShare to FacebookShare to Pinterest
Labels: quango