It would appear that the general public like a piss take.

Within hours of London 2012 unveiling its much-awaited Olympic mascot Wenlock and his Paralympic partner Mandeville to the world, a series of one-eyed impersonators popped up in cyberspace.

Wielding a bottle of beer, a fake-Burberry clad character is the mascot of the “Chavlympics” 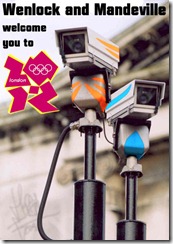 There's even a Hitler!